A two-man Durban team won the Race of Champions Air Race in Ulundi on Sunday. 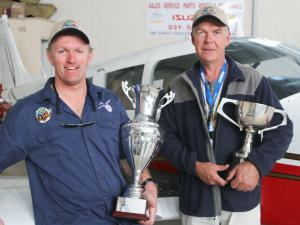 Pilots Donovan Bailey and William O’Driscoll won their first Race of Champions as the competition moved to Ulundi from Tzaneen for the first time in its seven-year history.

“It was quite amazing, it’s a fantastic feeling to have won the race. It’s been a goal of ours to improve our results, and we did. So we’re pretty happy about that,”

He said prize vouchers won by the top three were forfeited at a gala dinner, at which they were auctioned off and R80 000 was raised for a Zululand orphanage recommended by Zululand mayor Zanele ka Magwaza-Msibi.

The race was not without incident. In the final stage, pilot Christiaan Richardson and navigator Christiaan Vosloo made an emergency landing in a riverbed as they approached Ulundi Airport.

They were picked up by a rescue helicopter and after an assessment were reported to be in good health.

The aircraft was not damaged. Video footage of the forced landing can be seen here: