Some really weird and strange flying machines exist. Should you come across any of these innovations being either a true inspiration for soaring the skies or a suicide machine feel free to share it with us.

The WoopyFly, a sort of paraglider/trike/ultralight hybrid shown on the world stage at AERO
Friedrichshafen during April 2010 in Germany, has a wing that folds for storage like a paraglider — because it’s inflatable. Currently, it appears the wing itself is only available from distributors in Switzerland, Russia, and Japan. Those wishing to buy the trike (plus wing) can expect a complete kit cost to run about 13,780 Swiss Francs, which currently is about US$12,400 — plus the legal disclaimer that releases the manufacturer of liability. 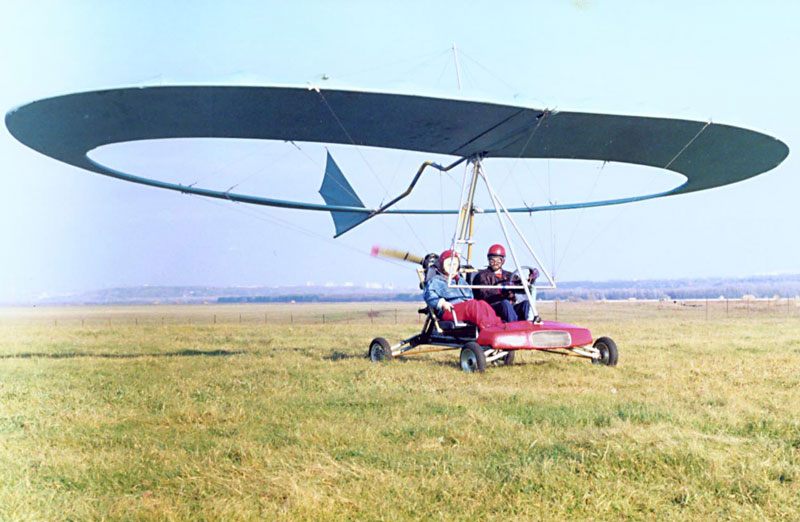 From somewhere out there comes this interesting circular hang glider mounted to an even more interesting “quad” car-like buggy. Note the steering wheel mounted to the base tube of the glider! I could find no evidence of this machine leaving the ground.

While this flying machine is not a trike or paraglider, I still think it is quite remarkable. The
propellers are opposing, so there is minimal torque effect, and the pilot control looks simple enough – similar to a hang glider using the down tubes. Push out to slow down (or in this case go backwards!), pull in to move forward and pull left or right to go that direction – very intuitive. All in all, a pretty amazing personal flying machine! Sometimes the Evolution takes a twist…

This  is a rather funny video clip of the 7th and final attempt of a once determined aviator.  This death trap is surely giving a new meaning to “Homebuilt” Come to think of it the Wright brothers never gave up and this guy also should not as this will at least makes for good video.  He can brand it “The all new Soapboxflattopparaglide” My advice is: Keep on trying, use less box, add more thrust and find a field with less trees. 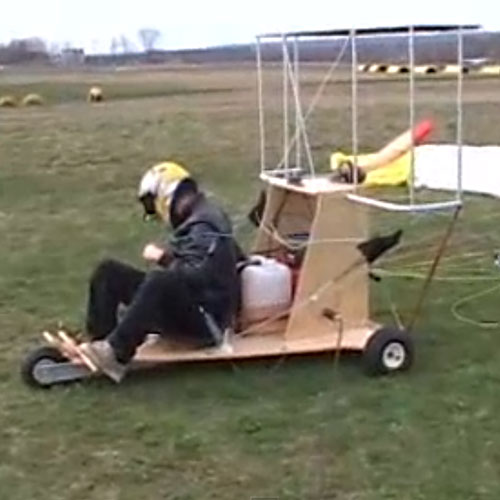 This is not exactly a trike, but still a noteworthy powered hang glider flying machine. One of the unique features of the Doodle Bug is the pilot is able to “sit” in the harness, similar to that of a trike pilot, for comfort. The unit also has a set of “retractable legs” which once airborne tuck up under the fuselage.

For 25 cents, every boy now has the chance to learn Flying Principles by Actual Practice! She goes gliding along, Fellows, but that’s not all. You can bank, ground loop, stall and side-slip. Absolutely nothing like this for fun and thrills. “I sent for the Glide-O-Bike…they sure are swell!” “The Glide-O-Bike is the dandiest thing I ever owned!” 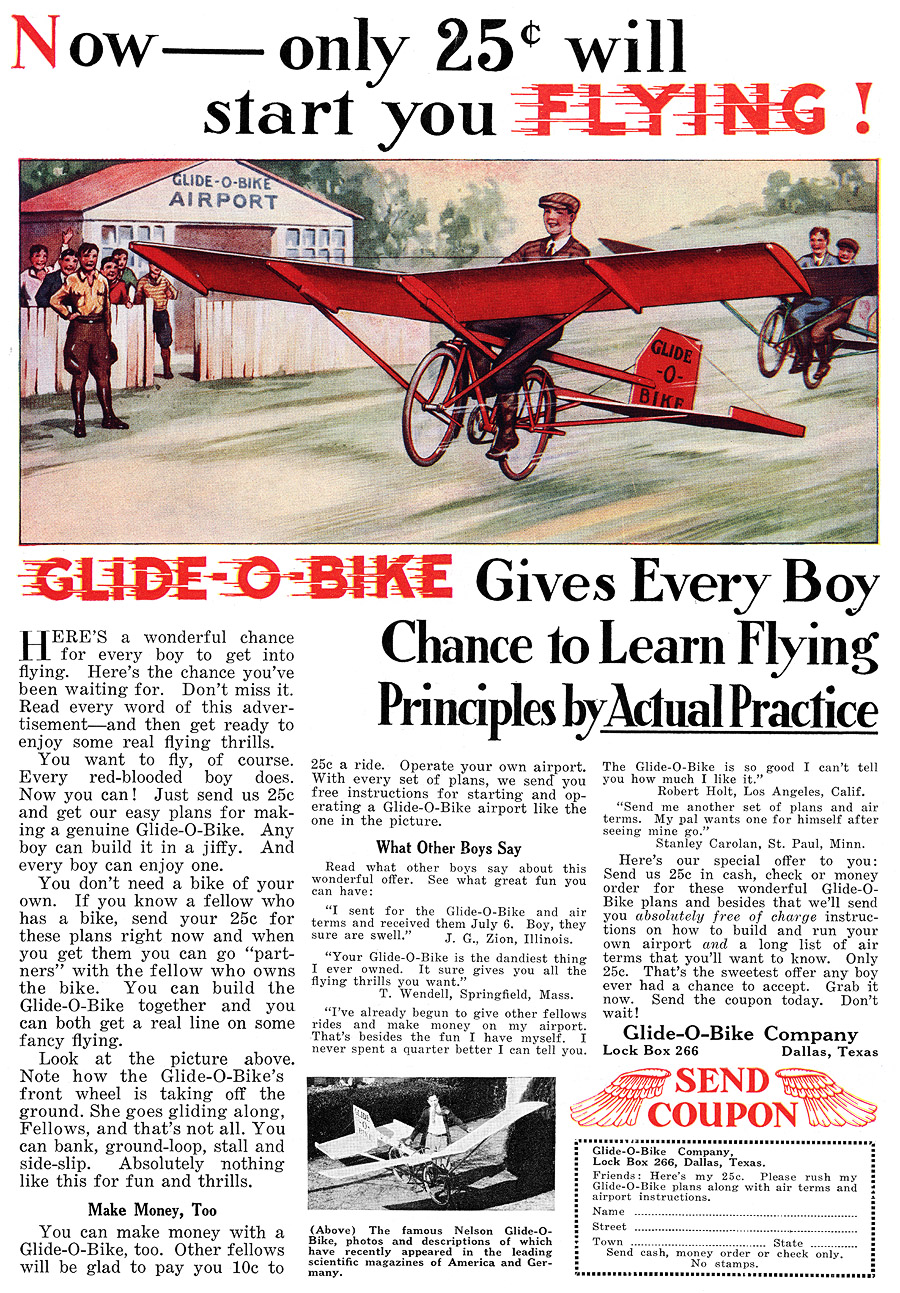 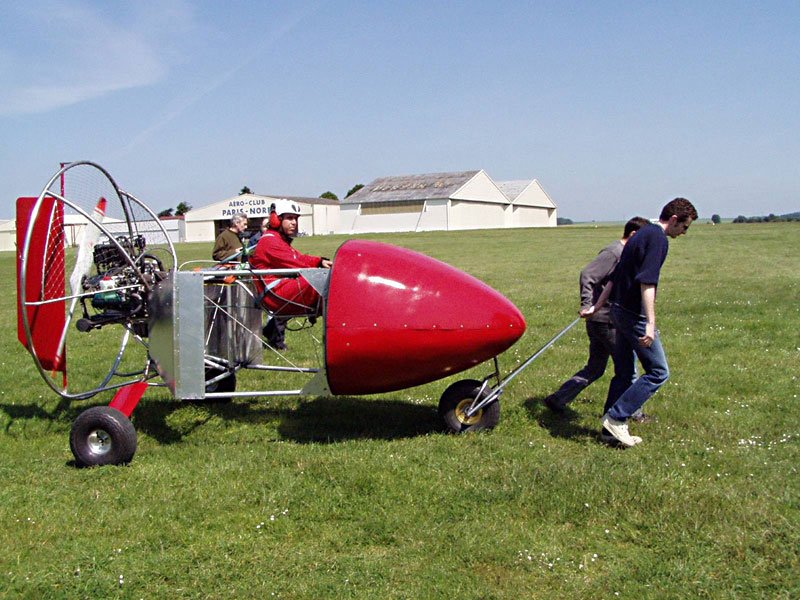 Not exactly sure what this trike is for, but it sure will be the talk of the hangar! Probably a bit over the 254 lb limit for an ultralight vehicle. We have a lift off…..

A helicopter (or chopper, helo or whirlybird) is a type of rotorcraft in which lift and thrust are supplied by rotors. This allows the helicopter to take off and land vertically, to hover, and to fly forwards, backwards, and laterally. These attributes allow helicopters to be used in congested or isolated areas where fixed-wing aircraft would usually not be able to take off or land. The capability to efficiently hover for extended periods of time allows a helicopter to accomplish tasks that fixed-wing aircraft and other forms of vertical takeoff and landing aircraft cannot perform.

The word helicopter is adapted from the French hélicoptère, coined by Gustave de Ponton d’Amecourt in 1861, which originates from the Greek helix/helik- (ἕλιξ) = “twisted, curved”[1] and pteron (πτερόν) = “wing”.[2][3][4]

Helicopters were developed and built during the first half-century of flight, with the Focke-Wulf Fw 61 being the first operational helicopter in 1936. Some helicopters reached limited production, but it was not until 1942 that a helicopter designed by Igor Sikorsky reached full-scale production,[5] with 131 aircraft built.[6] Though most earlier designs used more than one main rotor, it is the single main rotor with anti-torque tail rotor configuration that has become the most common helicopter configuration. Tandem rotor helicopters are also in widespread use, due to their better payload capacity. Quadrotor helicopters and other types of multicopter have been developed for specialized applications.