Experience nostalgic scenic flights around Johannesburg in our superbly-restored DC-3 Dakota, cruising at a comfortable altitude, low enough to identify and enjoy the most enjoyable sights of Johannesburg from the air.

Springbok Classic Air operates scenic flights on the last Saturday of every month, from the historic Rand Airport in Germiston.

The scenic flights are typically 20 minutes in duration. A minimum number of passengers are required to confirm the flight, please CONTACT US to enquire about availability, cost and times. 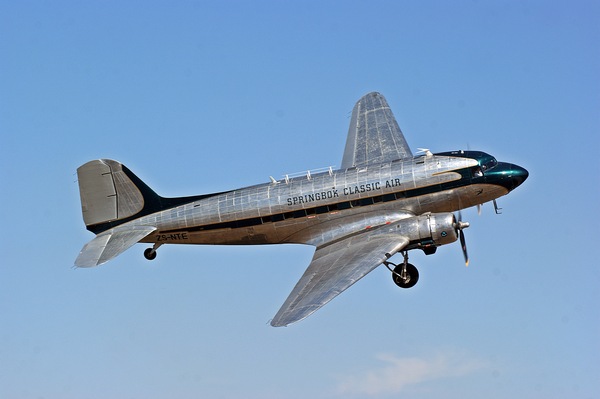 History on ZS-NTE
This aircraft was built at the Douglas Aircraft Corporation plant at Oklahoma City, Oklahoma in the USA under Contract number W535-AC-2405 for the United States Army Air Force (USAAF), as a model C-47A-1-DK. It was test flown and delivered to the USAAF on the 24th of September 1943 as USAAF serial number 42-92157.It was transferred under the “lend-lease” agreement between the USA and Great Britain to the Royal Air Force and was transferred as such to RAF Middle East on the 20th of January 1944 and given RAF serial number FL565. Under RAF terminology it was designated a Douglas “Dakota” Mk III.

It was immediately transferred to 28 Squadron South African Air Force (SAAF) Transport Squadron, Mediterranean Theatre, then based at Castel Benito in western Libya. It operated flights throughout the Mediterranean region, in particular Bari (Italy), Ras-el-Ma (Morocco) and Rabat-Sale (Morocco). 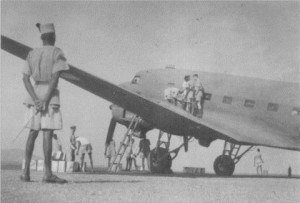 From June 1944 it was based at Maison Blanche, Algiers, Algeria continuing cargo and passenger flights throughout the Mediterranean area. The final air assault in Italy, launched on 9 April 1945, was spearheaded by fighter-bombers of Nos 7 and 8 Wings, 5 Sqn, medium bombers of No 3 Wing and the Army co-operation Sqn. Liberators of No 2 wing and Baltimores of No 15 Sqn operated by night. The surrender of the German force on 2 May 1945 brought an end to a relentless pursuit which had taken the SAAF squadrons without a break from El Alamein through Tunis and Sicily to the Alps. The aircraft remained at Maison Blanche until September 1945, when it was flown to Rand Airport in South Africa and serialised 6873 with the SAAF, on the 1st of October of that year. It was then impressed, still with 28 squadron, into no 5 wing and used on the “Shuttle Service” or “Springbok Shuttle” ferrying service men home from World War II. The service was extended to Cairo as the war progressed and eventually through the north of Africa to Bari and Rome by the time Dakotas were in use.
The Shuttle Service was greatly expanded at the war’s end, the intention being the return of all South African troops by Christmas 1945. The Dakotas of 5 Wing were joined by additional Dakotas of 28 Sqn as they returned home from the war zone. By 25 January 1946 some 101 676 passengers had been carried.

It was placed in temporary storage by 1 Air Depot based at Roberts Heights (later Voortrekkerhoogte and subsequently Thaba Tshwane)on 28 November 1947. It was later placed in long term storage, just on the other side of Zwartkops Air Station, at Snake Valley, by 15 Air depot on 2 June 1950. It remained in long term storage for 10 years, and was successfully flown to AFB Ysterplaat on 6 August 1960 and taken to 11 Air depot, before returning to 1 Air Depot at Voortrekkerhoogte on 19 January 1966. 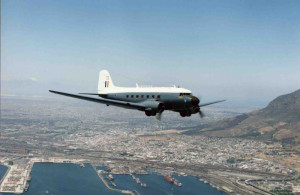 It began a new life and service at 25 squadron at Ysterplaat on 13 September 1966.On 8 June 1971 it was transferred to 86 Multi Engine Conversion Unit at AFB Bloemspruit, Bloemfontein.

On the 28th of December 1981 the aircraft was transferred to the Langebaanweg Navigation School where it remained until 20 November 1984 at which time it joined 35 squadron at Cape Town. Here it was the first aircraft converted to “Dakleton” status (its service followed the retirement of the much newer Avro Shackleton Mk 3’s)as a maritime patrol aircraft. This involved extensive modification of the airframe and systems and conversion to SAAF “Dakota MkIV”status. It was the first Dakota to be fitted with radar equipment in the SAAF.

In 1995 the aircraft was placed for sale by tender by Armscor together with its sister-ship, 6848. Both aircraft were sold to Wally Gale and John Gaylard of Aero Rebuilds at Rand Airport and registered ZS-NTE and NTD respectively.
The aircraft received a cursory Check V and was placed in service, still in its blue SAAF colours, as ZS-NTE. 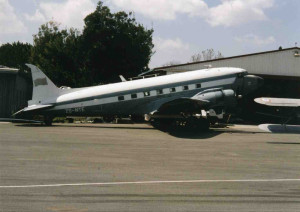 It was re-flown on the 1st of August 1995. On the 23rd of May 1996 it was ferried to Lubumbashi in the Democratic Republic of Congo, where it was based for some time. It operated cargo flights in the Eastern DRC. On the 22nd of March 1997 it departed Dilolo via Ndola for Rand Airport, arriving at Rand Airport 8 hours and 30 minutes flying time later. The total airframe since the 24th of September 1943 was just 12438 hours.

The aircraft had some small defects, which were not rectified- and the aircraft was parked. Later Mr. Gale passed away and the business he and Mr. Gaylard owned was liquidated. In 2002 the aircraft, by now partly dismantled was sold at auction to Captain Flippie Vermuelen. The aircraft was inspected and stripped pending restoration. It was then placed in storage for the next seven years. Restoration commenced on 5 April 2009, with aircraft receiving a very comprehensive check and conversion to modern standards.
As a point of interest, during structural repairs, at least three bullet holes of small caliber were repaired in the left nacelle and aft fuselage. 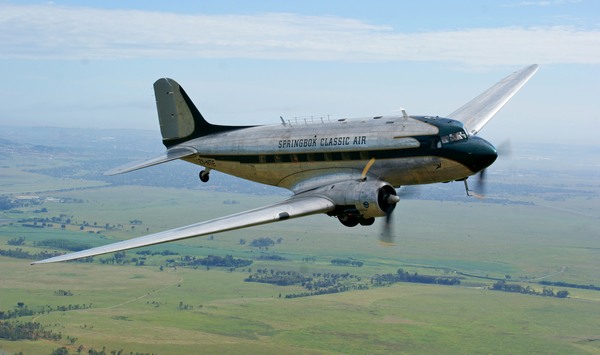 Thank you to Captain Flippie Vermeulen and Ronell Myburgh for inviting us along on this flight of a life time!