In this video pilot Rob Mark talks us through his 3 day training experience in the Albatross L39 and explains the major differences to other traditional planes
Article text courtesy of WarbirdAlley.com
The L-39 is a single engine, tandem two seat, all-metal,

subsonic aircraft. The aircraft’s primary mission is basic and advanced training, with external armament stores that would enabled it to fulfill operational training in ground attack roles if required. The L-39 is a unique blend of Soviet-style simplicity and Czechoslovakian technology.

Under normal circumstances, the L-39 is completely self-sufficient for start. Starting air is provided by a built-in auxiliary power unit called a Sapphire. “Hidden” under the engine, this  unit contains a  small turbine engine, starter, computer modules for automated RPM and EGT control, automated bleed valves, and various solenoids – all of which are designed to work together to provide automatic pneumatic power for starting the engine. The system works great, and operation is a breeze. You start the Sapphire merely by pushing a button. It starts with a pleasant whine, and about 20 seconds later it has reached idle speed. A light on the instrument panel will indicates when it’s ready.

Starting the engine is equally straightforward. You momentarily push the engine start button and move the throttle into the start position, then you just sit there and monitor the start parameters while the engine winds up. Once the engine has whistled up to a stable idle condition, the Sapphire’s job is complete, and it shuts off automatically.

Taxiing is one of the more tricky aspects of operating the L-39. It’s definitely a skill which can 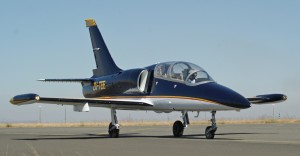 only be learned by practice, practice and more practice. There is NO nose wheel steering on the L-39, steering is done by differential braking.
The takeoff roll is very conventional for a jet – slow at first, and more exhilarating as it goes faster. The rudder does not begin to take much effect until about 45 knots, so it’s important to start the takeoff with the nose-wheel straight. (Remember that any low-speed steering involves using the brakes) The average takeoff roll on a standard day at sea level is about 1700 feet, and an L-39 can usually safely operate out of a 4,500-foot strip at most lower elevations.

Start easing the stick back at 96 knots and takeoff occurs at about 110 KIAS. You retract the gear immediately, and wait a few seconds until 140 KIAS to retract the flaps. There is a slight pitch down sensation as the flaps retract, but this is easily countered with a slight back-stick pressure. Since the optimum climb speed is around 216 KIAS, it’s a good idea to stay in a very shallow climb until reaching the appropriate speed, providing there is no serious obstacles. Once 216 is reached, the sea level climb rate is about 4,000 feet per minute. At climb power settings and low altitude, the engine burns about 330 gallons per hour but this decreases quite a bit  less than 140 gallons per hour in cruise at 18,000 feet.

What’s it like to fly the L-39?
It’s pure bliss!! The flight control system is all-mechanical, with rod-actuated control surfaces, and the control feel is fairly heavy, but smooth and instantly responsive. Visibility is great in all directions. Aerobatics are easy and rewarding, providing you are used to pulling a few G’s. Entry speed for most over-the-top maneuvers is 320-340 KIAS, and a 4-G loop takes approximately 4,000 feet of vertical space.  Inverted flying in an L-39 for those so inclined, are limited to 10 seconds due to oil system limitations. 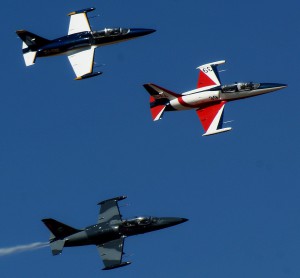 On landing, initial approach is usually flown at 200-250 KIAS. On downwind, you pull the throttle back to 80-85% RPM and extend the speed brakes with the throttle-mounted button under your left thumb. Once below 180 KIAS on downwind, you extend the landing gear and retract the speed brakes if desired. Slowing further, the flaps can be extended to either the “Takeoff” or “Full” position when below 160 KIAS. The final turn is flown at 140 KIAS, slowing to 120 KIAS when on final. The final turn and final approach require strict attention to airspeed and power control.

An undetected sink rate, steep glide path, or improper touchdown aim point, coupled with a too-low power setting, can get you in big trouble because of that old bugger, engine spool-up time. Extending the speed brakes for the approach helps keep the RPMs up, and the spool-up times short.

At about 15 feet AGL over the threshold, you smoothly pull the power off and flare gently. Once on the ground, you have a choice of stopping techniques. On short runways you should lower the nosewheel and carefully use the wheel brakes to minimize the rollout distance. On long runways, you can aerobrake by raising the flaps and holding the nose up until it lets down by itself. 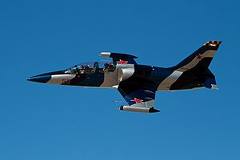 The L-39 is a docile, fun, jet warbird. It requires very little additional support equipment or ground crew, can be operated from relatively short runways, mechanically reliable and robust, and can be operated for about the same overall per-hour cost as many “recip” warbirds. Flying one of these L-39’s is as close to being a fighter pilot as many people will ever get.
.
Tragically, one of our  very own pilots on the South African airshow circuit, Gianfranco Cicogna

Mozzoni lost his life on 30 June 2012 at the Klerksdorp Air Show in South Africa, whilst performing aerobatics flying in an Albatros L39 with registration ZU-HIT.

A short history on this aircraft.
The L-39 “Albatros” is a high-performance jet trainer developed in Czechoslovakia. The L-39 “Albatros” was selected as the standard jet trainer in 1972 for the Soviet Union and the Warsaw Pact countries and was the successor to the L-29 Delfin jet. Its design began in 1966, and the first prototype made its first flight on 4 November 1968. However, serial production was delayed until 1974 due to problems with the design of the air intakes. More than 2800 planes of all versions were built.
Currently the L-39 is being used in military service of more than 30 Air Forces in Europe (including Russia), Asia, Africa and America.
Research: Adam Barnard
Source: Buck Wyndham ( L-39 Instructor)