The video speaks for itself and I just thought it was really interesting. Especially the flare capability to light up landing areas, since there were no real runway lights back then. This was a great project to restore this airplane with a lot of history behind it.

This aircraft was a popular single-engine four-to-five seat aircraft back in the day manufactured by Stinson Aircraft in Michigan. This aircraft first flew in 1933, between World War I and World War II.

It has a cruise speed of 154 knots (285 km/h) and a range of 739nm (1369km) with a service ceiling of 21000 ft. These are not bad specs for an aircraft that is so old and can carry so many passengers. It is also powered by a radial engine, giving this airplane that beautiful, unique sound we all love!

This aircraft was used in the military of more than 10 countries such as Australia, United Kingdom, United States, Brazil etc. They were used as military aircraft and in some circumstances, to tow gliders or for surveillance. 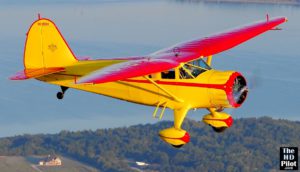